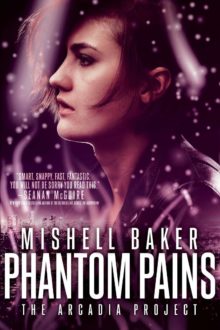 Four months ago, Millie left the Arcadia Project after losing a friend to the lethal magic of an Unseelie fey countess. Now, on what’s meant to be a last visit to the scene of the crime, Millie and her former boss Caryl encounter what seems to be her friend’s tormented ghost. One problem: according to Caryl, ghosts don’t exist.

Millie has a new life, a stressful new job, and no time to get pulled back into the Project’s chaos, but she agrees to tell agents from the Project’s National Headquarters her side of the ghost story. During her visit, an agent is gruesomely murdered in a way only Caryl could have accomplished. Millie knows Caryl is innocent, but the only way to save her from the Project’s severe, off-the-books justice is to uncover the mystery behind incorporeal fey known as wraiths. Why has the centuries-old Project never heard of them? Why are they tormenting and killing innocent people? And how do you fight an enemy that is only seen when it wants to be seen? Millie must answer these questions not only to save Caryl, but to foil an insidious arcane terrorist plot that would leave two worlds in ruins.

"Everything readers think they know about both worlds will be upended by this enthralling installment."

"This follow-up to Borderline keeps the emotional punches from Baker’s resilient protagonist coming."

"“Phantom Pains...absolutely fulfills the promise of the first book—and then some..."

"..another intriguing, trope-twisting mystery...another opportunity to spend time with Millie...one of the most complex, engaging, occasionally frustrating protagonists urban fantasy has to offer."

Also In This Series